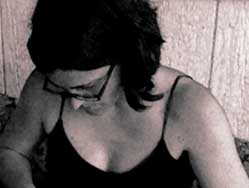 Gwynevaire Myrrh was born on May 31, 1960, to Balthazar and Eurethra Myrrh of Mountebank, Wisconsin. In their big Victorian house on Maple Street, little Gwyn had a happy childhood, playing in the spacious yard with the dolls her Grandma Annie made for her by hand. A fixture in her big wicker chair on the veranda, Grandma enthralled the girl with Russian fairy tales and ghost stories, and descriptions of life at the glamorous court of the czar. Gwyn was not without playmates her own age, though. Whenever she walked one of her dolls through the front gate, a neigborhood child would soon follow, exactly duplicating every action of the doll's limbs. A neighbor recalls, "Our moms always told us, when it's another kid's yard and another kid's toys, you play by their rules. It was the same with Gwyn - except in her yard, we were the toys."

From an early age, little Gwyn loved to visit Uncle Nelson's bookshop downtown. It was the beginning of a lifelong fascination with books, spurred by the chance to meet the authors who continued their life's work in the store's secluded back room. Mark Twain read to her from Tom Sawyer Among the Indians, Kipling told the missing Mowgli stories from memory, and Will Shakespeare held her spellbound when he acted out all the parts in his Tragedy of King Arthur. So passed many golden afternoons.

School seemed commonplace by comparison, but as Gwyn reached puberty, she developed an interest in cheerleading, or more accurately in cheerleaders. It amazed her to hear them chatter of the boys whose interest they couldn't seem to attract, and she helpfully offered to teach them some basic herb-lore. Of course, there were certain side effects to watching Gwyn prepare her philters up close, and the squad soon lost interest in the boys and concentrated on Gwyn herself. The school authorities were delighted; the cheerleading squad had never been more in synch, and the team had never been less distracted from their game. At least, until they got so frustrated that they, too, came to Gwyn for help, and...

Graduating with honors, Gwyn accepted a scholarship to prestigious Miskatonic University, where she majored in literature and minored in psychology and folklore. She quickly became the star of the school's drama club, riveting audiences both with her thespian talents and with her golden-haired, ethereal beauty. She seemed to have a unique ability to meet the eyes of every member of a theater audience at once. Many were those who gazed into those deep blue eyes and were never the same again. The sororities vied to win her as a member, but instead Gwyn started her own, and they flocked to live in her house. Not wishing to discriminate, she decided to make it the first co-ed fraternity/sorority, or as she dubbed it, "siblingity." "The other houses all seemed so shallow after that," one alumnus recalls wistfully. "They had their silly beer parties and their gossip. We had the chance to serve our Goddess."

After graduation, Gwyn decided to travel for a while; her parents, having passed on, had left her a substantial inheritance, and encouraged her to see the world. From 1982 to 1985 she lived a roving life, riding dolphins in the Aegean, yeti racing in Nepal, shooting the rapids of the Nurubamba in a bark canoe. It was at the Carnivale in Rio that she attracted the attention of the famously reclusive multimillionaire, Valentine Koala. Over snow crab legs and tangerine wine, the odd little man invited her to become caretaker of his vast private library. Intrigued by his collection, and considerably more by his statuesque teenaged twins Norman and Irma, Gwyn agreed to give it a try. But for someone so accustomed to travel, Koala's domed estate at the bottom of the Pacific soon came to seem far too confining. With the genetically-enhanced, superbly-built twins in tow, she stole a submarine and escaped.

The next four years were largely happy ones for Gwyn. Norman and Irma were loving companions, and were perpetually awed by the sights and sounds of the huge upper world. But whenever they settled in one place for long, the relentless Shark Men would appear, always seeking to return the twins to their father's watery domain. The martial arts and ninja techniques that Gwyn had learned in her travels came in handy many a time. But in the end, it was no way to live. Sadly, the siblings chose to go back to the sea and let their lover live in peace, figuring that their father couldn't live forever.

Alone again, Gwyn felt adrift and depressed. Deciding that it was time she got a more stable life, she found employment as an events coordinator at Barnes & Noble. She was appalled, however, at the seemingly endless line of disposable celebrities plugging their New Age self-help diet books. Looking to liven things up, she persuaded her old acquaintance Nero Caesar Germanicus to come and read from his autobiography, Lyre, Lyre, House on Fire. The colorful speaker brought down the house. Unfortunately, he also razed it to the ground, and Gwyn was unemployed once more.

In 1991, Gwyn returned to Mountebank for the funeral of Uncle Nelson, and was astonished to find that he had left the bookshop to her. Should she stay? Walking the quiet streets of her home town, she realized that, for all the wonders of the world that she had seen, she had an attachment for these shady lanes and spreading oaks, these century-old storefronts facing cobblestoned streets, that would not be denied. It was time that her parents' house was lived in again.

It was on her very first day as proprietress of the bookshop, as she flipped through the yellow pages looking for someone to help restore her neglected family home, that a darkly handsome, charismatic man in a dark blue suit inquired the price of a newly-autographed book of Emily Dickinson. Noting Gwyn's research, the charming stranger mentioned that he himself had some experience at fixing up old houses, and offered to take a look. By the end of the day, he was hired. By the time the renovation work was finished, they were in love. Gwyn had finally found a soul-mate who seemed to share nearly all of her interests and passions.

The ceremony of their union was a quiet and private one, held in the drawing room of the Myrrh house itself. Gwyn's parents gave their daughter away with pride, as Grandma and Uncle Nelson beamed. Sappho sang an ode to love that she had composed especially for the occasion. The cider was perfectly chilled, the pumpkin pie was served hot, and all agreed that it was the start of something beautiful.

-- A biography by Wersgor 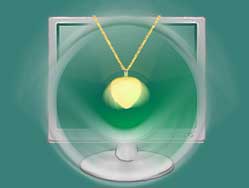